Showing posts from September, 2009
Show all

- September 17, 2009
Sep 11 (9/11) happens to be my marriage anniversary and thought about taking a day or two off and go to some place on our first anniversary. Initial choice was Lakshwadeep, but after speaking to "Raghu The Great", decided against going there in the rainy season. Goa and Kodaikanal were two other options we initially covered but thought would go for Goa in November timeframe and Kodaikanal wasn't worth if it's raining...
Since Rohit had been to Kerala last month and mentioned it was a memorable trip, thought will check it out. Kerala Greenery website  had lot's of packages and we zero-ed in on SP-05 which covered Alleppey to Kumarakom backwater, Munnar hill station and Cochin city.
We started here on 10th Sep 9:00 PM train from Yeshwanthpur - Kochuvelli Garibh Rath express.. It's a fairly new train with only 3AC and hence people are not aware about it... You can easily get tickets even 1 day before your travel….. Train started on time and we had our pack…
1 comment
Read More >> 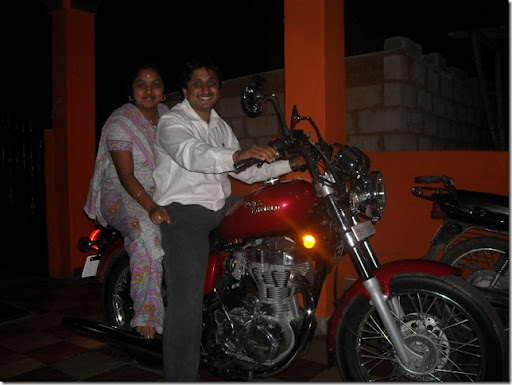 The macho man on the Royal EnfieldThunderbird !!! :)Test riding my brother-in-law's bike ..... My good old but special splendor (the rear wheel is visible) in the background !
Post a Comment
Read More >>
More posts