Went to Ghatti Subramanya temple on Saturday and was just discussing on what to do on my birthday. Pallavi suggested I take leave and plan for an outing and my first choice was Srirangapatna as we could cover the place driving in my bike. 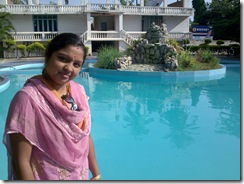 Sunday, we planned to leave at 6:00, but got up only at 7:15 and managed to leave house at 8:26. We had to take the DIO as my bike had some problems. We stopped for breakfast at Kamat Lokaruchi and after an heavy breakfast and some shopping there, started on a non-stop cruise to Srirangapatna. Pallavi was excited to drive the vehicle from Maddur and did a 50km drive herself. I just closed my eyes and was in praying mode :-). 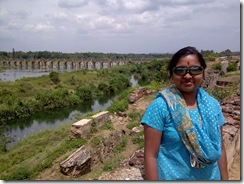 We headed to the picturesque Sriranganatha Swamy temple and after the darshan headed to the Obelisk. This is the place where the war between Tipu's army and the Britishers fought and a memorial dedicating all the killed/injured soldiers. We had a great view of the Cauvery river bank from there. After viewing the dungeon, Tipu sultan death place, we headed out to hotel.

We chose Amblee Resort where I had already gone twice.. It is the costliest near srirangapatna.... but it also the cleanest and family friendly resort. Took some rest and had heavy lunch. We left for KRS and Pallavi was more than keen to drive over the country side for a difference. KRS - Brindavan Garden was heavily crowded due to festival season. After eating lots of junk items and taking snaps, we headed back to the room. Reached around 10 and after having dinner, dozed off. Kept the alarm for 12:00 AM and after receiving the wishes, dozed off. 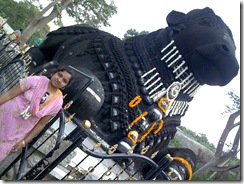 Got up early and headed to Chamundi hills. Thought it will be crowded for dusserha, but it wasn't so. After viewing Nandi, headed to the Palace. We did an elephant ride (ofcourse on Pallavi's request) and was great to see the college students group (all girls :() staring at us and thinking aloud - "whtz wrong with this guys?". As it was nearing 2, we went back to resort, did a checkout, visited the Nimishamba temple and Triveni Sangam and then headed home. highlight was the coracle boat ride over the speeding Kaveri. We stopped at Maddur for our snacks and coffee. we planned to return via Nice Road and that worked as there was a huge traffic jam near bidadi. Reached home and went straight to bed to doze off :) 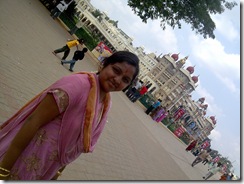 A nice vacation but tiresome one...