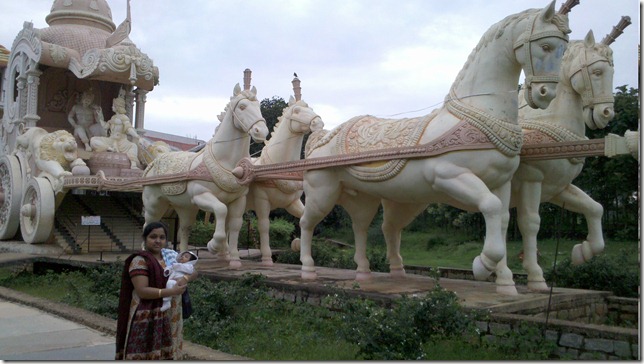 Persons: Pallavi, Sireesha and me.

Just after Marriage – we had been to Mauritius.

Our first anniversary trip was to Kerala.

Wanted to plan some good place for the second anniversary but since our cutie girl Sireesha is too young for travel (as per my wife) – we couldn’t plan to go anywhere far. Even Mysore was rejected!. Finally chose Vishwa Shanti Ashrama as we heard it is only around 50 kms from Dodballapur. This place is in outskirts of Nelamangala and infact comes before reaching Nelamangala if you are coming from Bangalore. It’s around 20 kms from Majestic.

We had been there about a year back in bike and that time had chosen to go via Maddure, but since the roads were bad – we chose to go via the NH to Tumkur and take a deviation near dabbaspet. Dabbaspet is the junction where you take a turn to go to Shivagange.

Roads were okay and we reached the place in about 1 and 1/2 hours. This was a longer route (About 70kms). The place is good to spend a couple of hours. We visited the panduranga statue – 8 forms of Lakshmi – Vishwa roopa darshini – gayathri devi temples in the main complex. The exteriors has a Ganesha, Shiva, Rama, Krishna and Hanuman temples. The chariot is a good place to take some snaps!

Return journey was eventful one. We went over a flyover in dabbaspet and had to take a U-Turn after some 3 kms. A policeman stopped us and asked for a ride to Dodballapur. without thinking I said yes, but since the route was totally dark with very less traffic – there was always a thought running through the mind on “what if he isn’t a policeman but a thief”… Pallavi was more terrified and both were relaxed only when he got down at the outskirts of Dodballapur.

There was a surprise as soon as we reached home. Bharath had got a cake and we were supposed to cut it – The part which I really hate! But somehow this went on well.

Some more snaps from the trip: